Skip to content
Press Enter / Return to begin your search.

Charleston is a famously pretty town, all crepe myrtles and antebellum porches, and the punk club where I was booked was no exception. The Tin Roof is a shack plastered with band stickers, but it’s a bright aqua shack with pink azaleas shading the stickers. 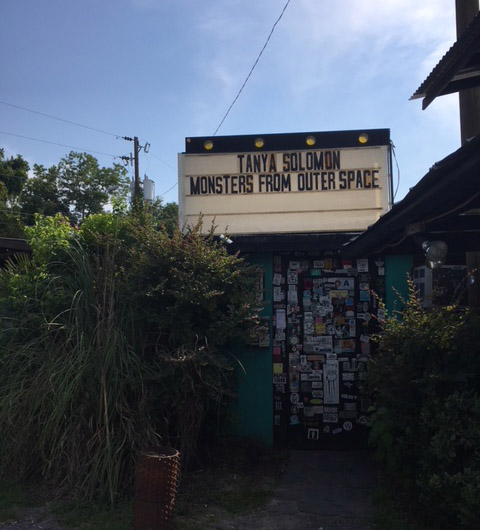 The inside was sweet and homey: cardboard stars dangling over the stage, piles of old zines, a mural of Willy Wonka making hand shadow birds. 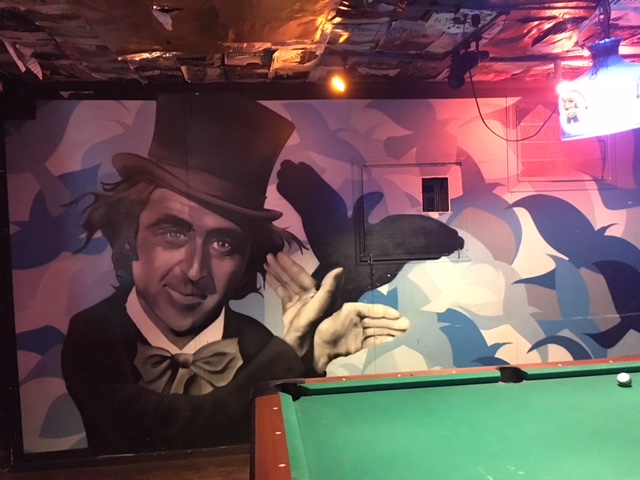 There were also more obvious “punk club” signifiers: dollar earplugs on offer, a drunk sound tech, a choice between the men’s room and the beer cooler for a dressing room. I didn’t mind. This is the kind of venue I used to play in while touring with the Bindlestiff Family Cirkus in the early 2000’s. In fact, the old-school Bindlestiff style of booking was the inspiration for this tour: when I couldn’t get a producer for my show after an initial theater residency in New York, I decided to start emailing independent music venues. It’s not as strange an idea as it was back then: most of them book burlesque shows once in a while. And though I also enjoy theater audiences, this kind of audience is my favorite. They’re excited to see something out of the ordinary, and are often tipsy and vocal.

There wasn’t a huge turnout, but apparently it was well-attended for a traveling act on a Thursday night. Afterwards, several people told me they’d never seen a magic show. I got that response a lot; birthday parties and Vegas are the only places one might catch a magician these days.

Most of the crowd dispersed before the Monsters from Outer Space went on, but they still put on their elaborate classic movie-monster makeup and set up their giant Halloween props and played Misfits-inspired horror punk for a few lucky souls.

I returned to Tin Roof the next morning to pick up something I’d left, and found its owner, Erin, sweeping cigarette butts out of the azaleas. I told her how great it feels to play an old-school DIY venue, and she seemed pleased to hear it. But she corrected me when I called it a punk club. Tin Roof’s mainstay is punk, but she thinks of the club as a place where any kind of art can happen, and everyone is welcome. The Tin Roof, she said, and other venues like it, exist to keep culture alive. Any kind of culture. Anything besides big-box stores and condos.

View all posts by tanyasolomon